Special and visual effects have been part and parcel of movie making since the dawn of cinema. From the days of Thomas Edison, to King Kong (1933), Jaws (1975) and Jungle Book (2018); today’s Hollywood blockbusters are jam packed with explosions, CG imagery, mystical make-believe and intrigue, fantasy locations, and convincing characters created from software programmes. It’s hard to imagine a cinematic world where humans don’t teleport through wormholes while battling fiery dragons and interplanetary demons. Oversized blue people, who are bigger, stronger and more advanced than humans. Anything a screenwriter can come up with is now possible to put on screen in a way that’s authentic and convincing and not surprisingly, today nearly every major release comes with a hefty VFX budget.

Not to be confused, VFX is more than just explosions, humans flying through the sky and special effects movies. It includes animation, creating absolutely photorealistic humanoid computer-generated characters and putting them in situations where we couldn’t before thanks to the outrageous computer power and new software. It allows film makers to achieve a movie rooted in reality even though it was artificially created.

According to Mediatech Africa exhibition director Simon Robinson, as with all technology centric industries, VFX has evolved dramatically over time and particularly over the past 10 years. 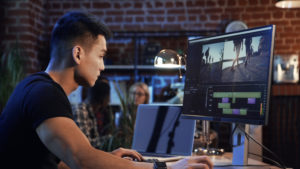 “Without doubt, VFX has a bright future and we are currently in the golden age of visual effects. There have been incredible and revolutionary breakthroughs in the way technologies have been used in a range of Oscar winning movies of late and progressively more on TV too. Growth is evident in the quality and complexity of visual effects, as well as constant innovation in photorealism. What’s more – all of these techniques continue to be rapidly improved upon as technology leapfrogs forward,” adds Robinson.

Today’s market is buoyant and on any given year, about eight of the top 10 grossing movies are likely to be visual effects-oriented or computer-animated films and many of the most popular streaming shows were also VFX heavy. The fact that studios spend tens of millions of dollars on visual effects has essentially turned VFX into a commodity. There’s absolutely no doubt about it – the business of VFX is booming. Supporting this construct – data from research firm comScore reveals that North America broke box office records in 2017 with ticket sales in the US and Canada earning $11.8-billion. The final tally for 2018 was $11.9 billion while the global box office in 2018 was $42 billion. These figures prove that streaming is not eroding movie theatre attendance as once believed it would.

“It’s true, VFX has redefined and elevated film making to new heights but VFX comes with a price tag. If you want evidence of this, HBO’s hit drama Game of Thrones eighth and final season – with its CGI dragons and epic battle scenes – is reported to be the most expensive one yet with episodes estimated to cost $15-million each,” says Robinson. “As a rule, productions that use extensive visual effects don’t come cheap. Why? Because it requires skill and despite the digital revolution, and off-the-shelf software, it still takes hours of labour intensive work by creative technicians and artists working behind the scenes.”

When you see an image of a face that looks real – down to the reflection and refraction of skin – the data used to create that single frame is massive. Multiply that by 30 frames a second, times however many seconds, and the computational power is extraordinarily expensive. That’s why it can be easier for animators to work on fantastical alien creatures or robots.

In a series like the GOT franchise, it all starts with artist’s sketches, then 3D models are created. It involves physics and computers to create and emulate real physical textures and materials. There’s even a specialist on set just to verify the correctness of the shadows that mechanical buildings cast. To create realistic fire-breathing dragons, everything was based on nature. The process began with the study of lizards – for movement – and from bats they took the muscles of the wing and its structure. It’s reported that 71 employees worked on helping create the dragons, including 10 animators who were responsible for making the skin and muscles look natural. One person was responsible for the dragon’s skeleton, three illuminators, and 10 specialists who put the dragons together.

To simulate fire breathing dragons on screen, a robotic rail chamber was used, to which a flamethrower was attached. It simulated all the movements of the animal’s head so that the flame had directionality and that’s just the dragons. Creating other fantastic creatures in GOT required the same amount of work. During the shooting of the Battle of Winterfell, real horses were used, but much less than the plot needed so most were computer generated.

Visual effects now support so much of the storytelling that its influence is creeping into other departments – camera, lighting, costumes, sets, makeup, hair, production design and stunts – so there is more work than ever before. Companies are also leveraging new technologies such as VR and LED walls. Light-field capture, previs, cloud rendering, and game engines for real time production are other trends evident in the industry. The Jungle Book ushered in the use of game engines for virtual production which has been picking up greater adoption in the VFX community. Advances in lighting that have helped visual effects include smaller LED lights, that put out more light, and are remote-controlled, are responsible for improving the speed of set ups. Being able to programme lights makes interactive lighting more accurate.

What’s next for VFX?

Industrial Light & Magic (ILM) is reportedly working on using artificial intelligence to de-noise the images produced by ray tracing which is expected to cut down on CPU and render time. They are also investigating techniques to recognise and replace human faces in a semi-automated way which is potentially a huge leap forward. ILM is also researching technology to capture performance without helmets and balls because an actor performs best when comfortable and will move differently (and less naturally) when you put a weight on his head.

Of course the arrival of 5G – the fifth generation wireless system – will change everything and the industry eagerly anticipates this advancement. It’s expected to take down latency to below human perception and you will be able to move data in seemingly real time. “This will have a huge impact on production time and budgets,” says Robinson.

Robinson goes on to say that the ground rules of imagination have not changed but the tech and digital magic that’s used to deliver it to viewers certainly has.

“10 years ago it would not have been possible to create The Jungle Book remake which was almost entirely created on computer and collected a healthy $103 million at the box office on its opening weekend. Set in the jungles of India, the cast and crew never filmed anywhere but a LA warehouse. Neel Sethi (Mowgli) worked with a cast of characters created entirely in CGI – with the voices recorded months later,” says Robinson. “This Hollywood hit used extensive new and innovative technologies, including cloud rendering to handle the hundreds of thousands of processing hours needed to render an entire rain forest in photographic detail and so much more. That it works, is proof of the unending progression of computer-assisted filmmaking, which is getting ever closer to replicating reality.”

There’s a convergence of immersive tech with today’s established tech which is a clear sign of how the industry is moving forward and it’s expected that AR will play an even bigger role in the film making process. Real time visualisation tools can now be built to make better decisions on set. There are also big opportunities around AI technology and improved visual effects processes. Cloud computing is expected to have a massive impact on the industry with the achievement of photorealism in greatly reduced time frames.

With an explosion of streaming and VOD platforms including Netflix, YouTube, Amazon Prime Video, Hulu, Apple, DEOD, among others, the need for content has never been greater and with it the need for VFX of every description. Robinson believes that visual effects will become even more universal and says that the next 10 years are likely to be even more innovative as technology continues to evolve in ways that help create movies that push VFX to new levels and improve the viewer experience.

“Some believe that overuse of VFX has taken the imagination out of film making and the viewer’s imagination isn’t given a job anymore – it’s all shoveled on them. While practical sets may make things seem more tactile – digital movie sets free the film maker to insert things otherwise impossible. No matter what side of the fence you fly your flag – VFX has been responsible for ionic movie moments that have forever changed the industry and it’s creating huge employment opportunities and pushing the development of new technology. And you can take that to the bank,” concludes Robinson.

Mediatech Africa is on between 17 and 19 July. The show is the largest and only one of its kind on the continent attracting an extensive audience that covers six verticals including: Pro Audio (lighting and staging); Audio Visual Integration; Broadcast (TV & Radio); Studio (Recording – DJ); Digital Media (VOD – OTT); Film & Video (Production). Register before the 12 July closing date to avoid paying the R100 entrance fee and be exposed to the latest in VFX technology being used in local productions and so much more.