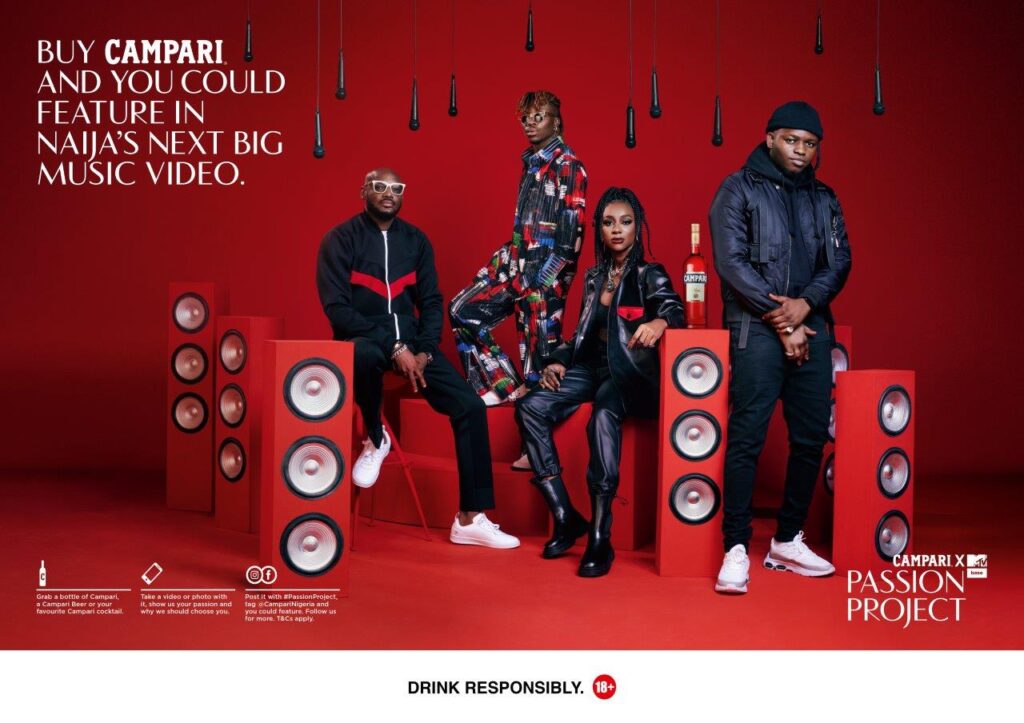 Campari, which lists Africa as one of its biggest markets, is championing passion and creativity in a brave new campaign which launched last month (October).

Conceptualised and implemented by HaveYouHeard, the campaign puts Campari in the hands of a new, ambitious generation and positions it as a badge for their boldness, creativity and passion.

At its core is a collaboration with MTV Base featuring living Afrobeats legend and Campari’s current brand ambassador, 2Baba, and on-trend-in-Africa and internationally awarded musicians Oxlade, GoodGirl LA and T-Classic.

The collaboration sees Campari and the well-entrenched channel create a unique platform for up-and-coming talent to step into the spotlight. Called Passion Project, this pairs film makers and stylists they feel are pushing the boundaries of their craft with either Oxlade, GoodGirl LA or T-Classic to produce a music video for their next big single.

The talent involved in the creation of each video will also sit down in conversation with 2Baba to get under the skin of what makes these artists tick, and what drives their passion and creativity. The interview series will be aired across west Africa on MTV Base West and online.

The campaign isn’t just for the artists though – it’s also offering fans the opportunity to share the stage with these icons of cool and become a part of culture themselves. To secure that chance, they’ll need to submit content expressing their own passion, with Campari.

Asked why he believed the Passion Project to be so important, 2Baba said if he and Campari can help make people’s passion their life’s work, their work is done.

“We want to show everyone out there that their passions can become their careers. Just like I worked hard at making music my life’s work, we believe more people need to see the light and hopefully this helps them unleash all those dreams and potential.

“And that’s why this the Passion Project is not a once-off thing for Campari. Every year, we’ll come back bigger and better. And, next up imagine, we light up Ghana, Kenya, hold nothing back,” he said.

Supporting the platform and driving consumer engagement with it, is dynamic digital content premium trade collateral that aims to inform, entertain and inspire

Explaining the rationale behind the campaign, HaveYouHeard Head of Research and Insights, Claudia Schonitz, said that Campari and its way of communicating with young Nigerians needed to evolve if they were going to capture their attention … and conventional advertising wasn’t going to answer that.

HaveYouHeard teamed up with Malokun Labs on the ground in Lagos to gain insights into the cultural elements shaping how the youth market interacted with brands. Three studies, each comprising 565 interviewees, provided the information the insights team identified as resonating most with the target audience and hence needing magnification.

“Music is the most influential and accessible community in African youth culture, crossing borders and breaking ground for new trends. And music videos are key to an artist’s success with YouTube used as a ‘free’ music streaming platform,” explained HaveYouHeard Group Executive Creative Director, Dan Berkowitz.

“Consumption environments screen sports as a draw card, but when there isn’t a game, they shift to the music video channels. Still, even the biggest artists struggle to get funding for high quality video productions. We suggested Campari change that by engaging the youth with content and experiences that go beyond advertising through a strategy that makes the iconic brand an influential part of popular culture and turns the leaders and followers of the next cultural wave into a new generation of Campari fans,” he said.

“Now, as champions of passion and creativity, Campari’s role in culture is to support Africa’s new generation of artists and put them on the world stage,” added Schonitz.

“We’ve discovered the space where our passions meet theirs. And – more importantly – we’re playing a real role in what they care about by connecting them with who they look up to and putting them on the big stage through a pan-African partnership with Africa’s biggest music channel, MTV Base.”