“The small girl smiles. One eyelid flickers. She whips a pistol from her knickers.” 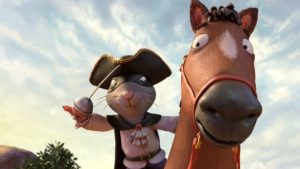 There’s the story of Little Red Riding Hood that everyone knows and then there’s the Roald Dahl version. Dahl may be best known for bestselling children’s books like Matilda, The BFG, Charlie and The Chocolate Factory, James and The Giant Peach and Fantastic Mr Fox, but it’s Revolting Rhymes, his collection of rebooted fairy tales, that is the most fun to read as a parent.

“I guess you think you know this story. You don’t. The real one’s much more gory,” Dahl writes at the beginning of the first story in the collection, a subversive reworking of Cinderella. “The phoney one, the one you know, was cooked up years and years ago, and made to sound all soft and sappy, just to keep the children happy.”

Now Dahl’s wicked sense of humour has been brought to life in Revolting Rhymes, a two-part animated special that is screening first and only on Showmax in Africa. Like Dahl did, the animation has reimagined the familiar stories anew, this time structuring them around the friendship of the pistol-packing Red Riding Hood and her resourceful best friend Snow White. The Big Bad Wolf, seven jockeys with gambling debts, and three little property-developing pigs all feature, as does Cinderella’s fairy godmother, Jack and a beanstalk and his nasty mother.

Whether you’re looking for an animation to enjoy without the kids or a story to discourage your daughter from waiting for a prince to solve all her problems, this is the animated special for you.

Revolting Rhymes was nominated for an Oscar and won 15 of the world’s biggest animation awards, including the International Emmy Kids Award for Animation; Best Animation at the BAFTA Children’s Awards; Best Animated Special at the Annie Awards; and Best One-Off Special at Kidscreen.

Revolting Rhymes was directed by Jakob Schuh (Oscar-nominated for The Gruffalo) and Jan Lachauer (Oscar-nominated for Room on the Broom) and co-directed by Bin Han To. It’s voiced by a stellar cast that includes Dominic West (The Affair) as The Wolf; Rose Leslie (Game of Thrones) as Red Riding Hood; and Gemma Chan (Humans) as Snow White.

Showmax now has all three of the BBC Christmas specials that Triggerfish has animated for Magic Light Pictures: Stick Man (2015), Revolting Rhymes (2016) and The Highway Rat (2017), which is also first and only on Showmax in Africa.

An adaptation of Julia Donaldson and Axel Scheffler’s bestseller, The Highway Rat is a swashbuckling tale of a greedy rat who craves buns and biscuits and comes to a sticky end. People’s Choice winner David Tennant (Doctor Who, Broadchurch) leads an impressive cast in the title role. After screening to 7.5m people over Christmas on the BBC, The Highway Rat recently won the Audience Award for 3-6 year olds at New York International Children’s Film Festival.

Next week, The Highway Rat will compete for Best TV Film at Annecy, the world’s most prestigious animation festival, which runs from 11-16 June 2018 in France. This is the third year in a row that a Magic Light Pictures production with animation from Triggerfish is in line for the award; their previous collaborations Revolting Rhymes and Stick Man won the Grand Cristal Award in Annecy for TV in 2017 and 2016 respectively.

Showmax also has Magic Light’s previous Donaldson/Scheffler adaptations: The Gruffalo, The Gruffalo’s Child and Room On The Broom, which also all won at Annecy.

Africa’s leading animation studio, Triggerfish has produced two of the top five highest-grossing South African feature films of all time: Adventures in Zambezia (2012) and Khumba (2013). Triggerfish is currently in production on their third feature film, Seal Team, and on Zog, another Donaldson/Scheffler adaptation produced by Magic Light Pictures for BBC for Christmas 2018. Jeremy Collins and Kelly Dillon’s short film, Belly Flop, is also screening at Annecy, as part of the closing ceremony.

Stream Revolting Rhymes here and The Highway Rat here, first and only on Showmax in Africa.

Tagged with: Showmax in Africa