By Dirk Visser: Head of Digital and Brand Strategy at Instinctif Partners

For centuries Africa has been seen as the dark continent, it has never been seen as place that is on the forefront of industry let alone technology but that has all changed. When it comes to Africa, the future has already happened and most have missed it.

The main issue that Africa has had to deal with is the auto-exotic gaze; a theoretical observation that states that we, as Africans, look at ourselves through the eyes of the West, and repackage this image into an “exotic” product, then offer it back to the West as authentic. This has been particularly true within the fashion and pop-culture industries but this thread has been seen in a variety of other segments.

African’s are starting to own their innovative nature and entrepreneurial spirit, they are no longer ‘waiting’ on the West to dictate to them how and when to use Digital technology. There is a rise of African solutions for African problems and the world is starting to take notice. 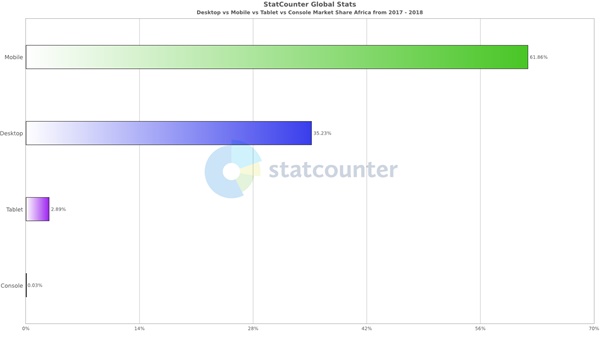 According to Statcounter, mobile devices dominate African’s usage when it comes to consuming Digital content. This shows that African’s both use and consume Digital whenever and wherever they want to. Brands would find this extremely useful when wanting to engage with people.

Africans are taking to ‘hacktivism’ – gaining unauthorized access to computer files or networks in order to further social or political ends – To change the political the climate and effect social change in their communities.

During the elections in Uganda in 2016, incumbent president Yoweri Museveni blocked access to Facebook, Twitter and Whatsapp to, in his words, stop the people telling lies. However Ugandans discovered how to use VPN’s to keep #UgandaDecides trending even though it showed that the online conversations were coming from different countries.

Code for Africa set up an online platform called Dodgy Doctors where patients can verify the credentials of the doctor they are seeing in order to clamp down on fake doctors that were causing harm in local communities. The web-based app allows patients in Kenya and Nigeria to search for their doctors on the national database and report them if they cannot find their name on the list. Users can also cross-reference how much they are being charged for medicines.

So what does this mean when it comes to engaging with Africa. Firstly, if brands want to join the conversation, their story needs to be authentic and genuine. The biggest mistake that brands can make is to think that a ‘western’ view will be able to fit into the African story. Brands need to be fully aware of the culture in which they are looking to engage.

Brands need to join the conversation and not dictate it. By using proper Social Listening, Brands will be able to clearly define what is important to users on the ground and provide both solutions and products that will add value to the users.

It is important for Brands to think globally but act locally. An example of this is using influencers, where Hollywood celebrities are aspirational, people connect better with influencers that come from their communities. Suffix, a rapper from Malawi, is collaborating with musicians from across Africa using free data calls and file sharing sites in order to get his music noticed. He would be a great example of an influencer that understands the local scene better than a Kendrick Lamar or J. Cole.

Africa is starting to be noticed by the world and the possibilities are endless for Brands to connect with a new audience, an audience that has a voice and loves sharing it. There is no better place globally to gain insight, get feedback and find success than Africa because Africa is where it’s at.