The Toyota Starlet, an affordable buy with great tech and outstanding safety features, will compete in the highly-competitive Sub B segment of the ‘small car’ category and target the price-conscious millennial seeking style, quality, drivability and reliability.

According to Toyota SA’s Senior Advertising Manager, Tasneem Lorgat, the objectives of the campaign were to successfully launch Toyota’s brand new nameplate and establish the Starlet name in South Africa, whilst still acknowledging the country’s ‘new normal’ in a way that’s humorous and appeals to a youthful consumer.

“The small car category is saturated with many great value competitors, so it’s really important for the Toyota Starlet to stand out,” said Lorgat. “And, while this awesome product speaks for itself, we needed to make sure our audience takes notice of the way we talk about it. 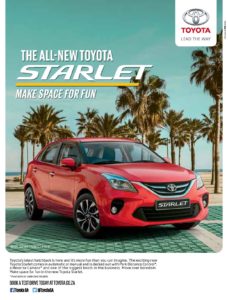 “Most of our competitors advertise functional specifications and value-adds, which make buying a small car feel like a compromise. We wanted to avoid them thinking about the Toyota Starlet in the same way,” she said.

The agency’s response was to make buying a Toyota Starlet feel like an accomplishment through storytelling and some humour because, if you’re going to drive, you might as well have fun.

“One of the most exciting things about buying a new car is showing it off to your friends. But how do you do that when practicing social distancing protocols … you’re not even allowed to be in the same car together?” explained Executive Creative Director, Tian Van Den Heever.

“Our creative concept and execution is based on showing off all the main features of the Toyota Starlet – the push start button, automatic transmission, multimedia interface with Apple CarPlay and Android Auto, rear park distance control with a reverse camera and a lot of space – in a way that is fun and acknowledges our new normal.

“So, we show a guy who has just collected his brand-new Toyota Starlet from the dealership showing off the car to his friends … by virtually having them in the car with him. Yip, our dude has strapped all the devices he has – smart phone, tablet and so on – to the seats, and there are his friends, logged in and going for a spin.”

The creative team for the TVC included Van Den Heever, Creative Director Julie Thorogood, Art Director Kursten Meyer and Copywriter Verona Meyer. Shot in one day at Maboneng in Johannesburg, it was directed by Kofi Zwana of Hungry Films with post-production by Fuelcontent.

“With this campaign, I think that FCB Joburg has positioned the Toyota Starlet as helping South Africans make space for a little fun in their lives,” added Toyota SA Advertising Manager, Lensha Dlamini.

“It clearly demonstrates that, with loads of space and the best infotainment features, the Toyota Starlet can take you on a fun-filled adventure anytime, from exploring your city to just picking up groceries.

“In effect, the Toyota Starlet is South Africa’s ticket to fun, really an enabler to take the fun with you or make sure you arrive in style, safely.”